What a complete wonder it is to be able to sit in front of a movie that transpires freedom in equal measure and a feeling — real or false, what does it matter — that the only thing that matters is making the stalls uncomfortable; causing one part of it to roar and squirm in its seat rolled over by a sardonic wheel of offense while the other utters complicit laughter at the lack of filter, morals and shame.

Few contemporary filmmakers have managed to fulfill this task while, at the same time, they have shaped high-quality feature films —with the necessary exceptions, of course—, such as Paul Verhoeven. He did it during his magnificent Dutch period, he reaffirmed it in his prolific and corrosive North American journey – eternal ‘Showgirls’– and has consolidated again on its return to the old continent with jewels like ‘She’.

With ‘Blessed’, the one from Amsterdam has shown at 82 that he continues to be the king of provocation, adapting for the big screen the novel ‘Immodest Acts: The Life of a Lesbian Nun in Renaissance Italy (Studies in the History of Sexuality)’ in a cathedral built on tons of blasphemy, eroticism, coal black comedy and that bad milk —almost— always present in his filmography.

The master of excess

At this point in the film it is not unreasonable to call Paul Verhoeven the master of excess. His already electrifying —and tricky— legacy has just been added by a ‘Benedetta’ who understands everything except containment, and who arrives crowned by a tone that does not take prisoners and that turns its 131 minutes of footage into an unrepeatable, cloudy and overwhelming experience.

Its more than two hours duration, perhaps somewhat excessive if we take into account the ups and downs of pace that undermine the last section of the second act, are little less than a museum of profane outbursts who do not hesitate to show sexual relations and naked bodies, or to represent the horrors of the plague and the effects of stigmata on the flesh in a festival of fluids of all shapes, textures and colors.

Although it may be overshadowed by the high rate of nonsense per minute, the film contains an enviable good cinematographic work, with a precise staging, an immaculate direction of photography by Jeanne Lapoirie – unleashed when it embraces apocalyptic abstraction – and interpretations that maintain the right tension so as not to fall into histrionics; Special mention to Virginie Efira, Daphne Patakia, Lambert Wilson and Charlotte Rampling, all splendid and tremendously immersed in the director’s game. 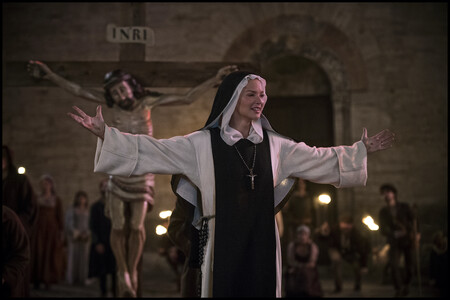 It is very difficult to corsetate and describe an almost unclassifiable ‘Benedetta’. Halfway between drama, psychosexual thriller and the ultimate joke of a Paul Verhoeven who wants to party more than ever, this exercise in style and authorship makes it difficult to know if complicity with him comes from the hand of his compendium of sly savagery or the awareness that a length of these characteristics continues to be classified as conflictive and almost taboo in the middle of 2021. Let it be Anyway, how good it feels to laugh out loud when the laughter is accompanied by such good cinema.