The Council of Ministers announced this Thursday new measures to contain the Covid-19 pandemic.

More updates
18:08 – Government trusts that new measures will be enough to control pandemic

For the prime minister, the measures announced today may be enough to control the pandemic and avoid future confinements, as has been happening in the rest of Europe.

“More than trusting the rules, I have trust in the individual behavior of each one”, said António Costa. “I trust that we all avoid doing what we shouldn’t do.”

If so, he continued, these measures will be sufficient to control the pandemic “in a situation that will be of increased risk”.

However, the Government does not foresee that the cases will start to decrease and the epidemiological curve will start to reverse.

Asked about the postponement of classes for the 2nd period, António Costa confirmed that this measure also extends to crèches and kindergartens, as well as private education. These days, according to the government official, will later be compensated for at Carnival and Easter.

According to the prime minister, the country is back in a state of calamity, but with “the hope that the set of these measures will be sufficient to contain this dynamic of the pandemic’s growth.”

5:58 pm – Classes restart on January 10th “applies to all levels of education”

Asked about the change to the school calendar, António Costa clarifies that the restart of classes on January 10th applies to all levels of education, “as well as AtL’s and other similar activities”.

As for the universities, Costa explains that they have their own calendar “which does not cover academic activities in this week of contact retention”.


Regarding the measures related to mandatory testing and certificates, the Prime Minister clarifies that they will come into force on December 1st.


“If there’s one thing we have to avoid, it’s having a January 2022 that doesn’t even come close to the tragic January 2021. So, in the week following New Year’s Eve, between the 2nd and 9th of January, we will have a week of contention contacts,” explained António Costa.

During that week, Costa calls for “limiting contacts outside the universe”, as teleworking will become mandatory and bars and clubs will once again be closed (with due compensation for these sectors).

There will also be a change to the school calendar, with classes restarting on January 10th. These days will be compensated with two fewer vacation days on Carnival and two fewer on Easter.

“This week of contention aims to ensure that after a period that we all know is a period of intense contact and family interaction, we avoid the crossing of people from different households”, explains the prime minister.

– Mandatory masks in all enclosed spaces

– Digital certificate is again required in restaurants, tourist and hotel establishments, in events with marked places and for gym attendance

– Mandatory testing for home visits; visits to patients admitted to health facilities; at all large events without marked seats or in improvised venues and sports venues and access to bars and clubs.

Tests are also mandatory for any entry into national territory, regardless of the passenger’s point of origin and nationality. “It is the obligation of all airlines, at the time of check-in, to only allow boarding on flights to Portugal by people who can prove that they are properly tested”, declared Costa.

17h32 –Portugal returns to the state of calamity on 1 December

The prime minister guarantees that if this is the decision of the health authorities, Portugal has “the necessary conditions” to vaccinate children.

There are 639,000 children potentially eligible for vaccination in Portugal. Costa announced that the first batch of vaccines from Pfizer arrives on December 20, with more than 300,000 doses. In January, a second batch arrives, with over 462,000 vaccines.

The first measure is to reinforce the vaccination effort, announces Costa, which involves, from now on, administering the booster dose to people who are already eligible, that is, over 65 years of age and who received the second dose more than five months ago, prescription-only people who have recovered from the illness for more than 150 days and over the age of 50 who have been vaccinated for more than five months with the single dose of Janssen.

“All of these will be vaccinated until the next December 19th”, guarantees Costa.


At the beginning of his speech at the Palácio da Ajuda, António Costa highlighted that Portugal is the country in Europe with the highest vaccination rate, which means that it has registered a lower number of cases and hospitalizations than the other countries in Europe. , and above all a lower number of deaths.

This means that “vaccination has allowed to save lives, reduce the number of infected people and ensure that each infected person has, as a rule, a less serious illness”, says Costa.

The prime minister also highlights that “we are frankly better than we were a year ago”, with fewer new cases, hospitalizations and deaths. Costa states that this is a reflection of vaccination and declares: “vaccination is worth it”.


What measurements on the table?

After hearing the experts at Infarmed, on Friday, the prime minister received, on Tuesday and Wednesday, in São Bento, the parties with parliamentary seats, which in the end left some clues about what could be announced this Thursday. Generally speaking, all parties conveyed the idea that there will be no “significant restrictions”.

The Government is thus preparing to recover, as of Monday, some anti-Covid measures, such as the return of masks in closed spaces, presentation of vaccination certificates and negative tests.

Chega said that the Government should impose the presentation of the certificate and a negative test for entry into bars, clubs and large events. Restoration should be left out of this measure, according to André Ventura, and in these cases, only the certificate will be required, “regardless of the time and day”.

With regard to the use of masks, the PAN spokesperson conveyed the Government’s “concern” regarding the use of masks in spaces such as “football stadiums, concerts and discos”, with Chega adding that the executive “is inclined ” to make the mask mandatory “in spaces” and recommend its use outdoors.

On the table will also be the strengthening of border control to mitigate the advance of the pandemic. Just yesterday, the PS presented a bill to postpone the extinction of the SEF for six months, with the argument that greater border control is needed at this stage.

The Público newspaper also advances that as of Monday, anyone traveling to Portugal by plane will be required to fill in a passenger identification card electronically. Registration will take place before boarding.

RTP also advances that the Government is considering postponing the start of the second period by a week, giving the youngest members extended Christmas holidays. The idea is to try to stop possible contagion in children after the Christmas period, since at this time, the highest incidence of infections is in children up to 9 years old.

According to RTP, this postponement would be compensated for during Carnival holidays. 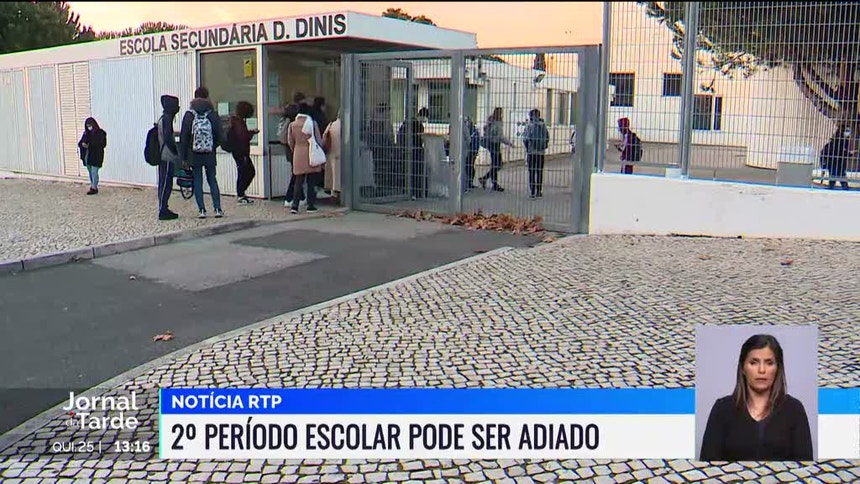 School directors applaud the initiative but ask the Government to make teachers a priority when taking the third dose.

The parents’ association says that the executive must find solutions so that children are not left alone at home. Parents and guardians feel divided.