The secretary general of the PS refused to answer whether he accepts the availability of the PSD, in case he needs it to govern.

António Costa also said that, in case of defeat in the legislative, he resigns as soon as the election night of the secretary general of the PS, while Rui Rio refused an immediate exit if he lost and admitted to remaining in the leadership of the PSD.

“I think that an absolute majority is what guarantees stability for four years”, declared António Costa, maintaining that without this there is a risk of “going from crisis to crisis, in two-year provisional governments”.

Immediately, Rui Rio countered that an absolute majority of the PS or the PSD is a scenario with a probability “very close to zero” and defended that there must be a “democratic spirit” and “willingness to negotiate the governability” of both parties to that “the country does not go through successive elections”.

On what he will do in case of defeat in the legislative on 30 January, the secretary general of the PS reiterated that “after having been prime minister for six years” he will consider that if he loses there was “a clear vote of no confidence on the part of the Portuguese” and that it is time for the socialists to choose “a new leadership”.

Asked if his resignation will take place on the night of the elections, António Costa replied: “Oh, yes, that’s for sure, and then the PS will have its process”.

The PSD president, in turn, ruled out following this path if he got lost: “I don’t go out during the day and I would never go out under any circumstances, because I think it’s a theatrical maneuver, it’s not exactly in my style.”
The conditions of the parties for convergences
The parties to the left of the PS and to the right of the PSD exposed their conditions for convergence with the two largest political forces, in a debate with nine, with BE, CDU and Livre defending different models and priorities.

In case there is a majority on the left, Catarina Martins maintained that after the legislative session, a State Budget for 2022 will not be discussed, but “a government contract for Portugal that resolves fundamental issues”. Regarding the Budget rejected last October, the BE coordinator observed: “Surely the PS itself will want to do a better job”.

On behalf of the CDU, the parliamentary leader of the PCP, João Oliveira, countered that “the stability of any government does not depend on the agreements and papers that are signed, it depends on the policy that is carried out” and expressed his willingness “to converge with all those who want to converge”.

The secretary general of the PS and prime minister, António Costa, considered that the parties on the left lacked “political will” to make the State Budget for 2022 viable, stressing that it did not even go to the specialty stage. 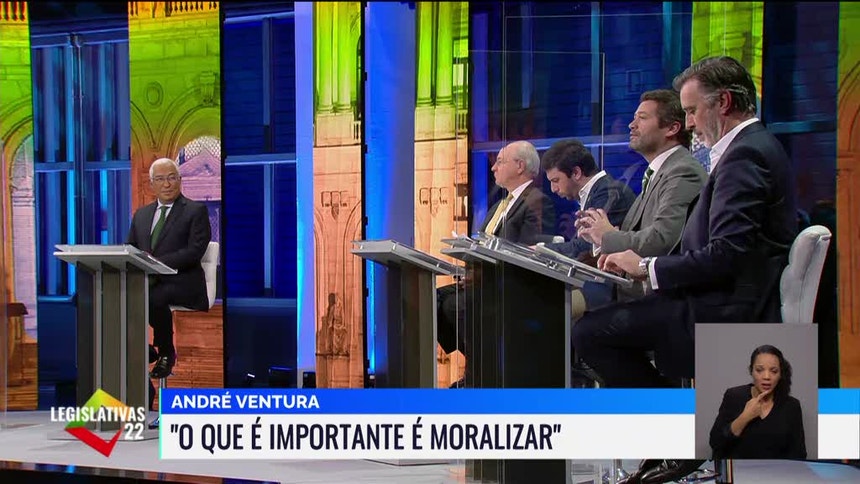 The head of Livre por Lisboa’s list, Rui Tavares, once again defended “an eco-geringonça” that is “the widest possible” and, unlike BE, pointed out as a priority “to seek to make a Budget viable” for 2022. “We don’t have the luxury of time. A Budget must be made viable to create negotiation space and a Government Program”, he said.

The president of the CDS-PP, Francisco Rodrigues dos Santos, showed himself available to “build an alternative solution to the left” even if the PSD does not win the elections, if the parties on the right are the majority in parliament: “A new parliamentary practice, and we have to give credit to Dr. António Costa, as happened with the Azores”.

André Ventura, president and sole deputy of Chega, repeated that he will demand presence in the Government if his party “has a significant vote, above 7%”.

The president and sole deputy of the Liberal Initiative, João Cotrim de Figueiredo, said he was open to discussing with the PSD “an alternative government”, with “reformist impetus”, but without certainty about the result: “I don’t know if it will be easy or not it’s going to be easy”.