From paradise to hell: images of the trail of destruction of the volcano in La Palma

The Cumbre Vieja volcano has already destroyed more than 100 houses and led to the evacuation of thousands of people.

“Paradise turns to hell with the eruption of the volcano on the Spanish island of La Palma,” writes the Spanish daily “El País” in an article published on the evening of Monday, 20 September. This is no small matter: on the idyllic island of La Palma, in the Canaries, this is the dominant sentiment. And there is even a city named Paradise that was, paradoxically, one of the first to be evacuated on Sunday night. Some call it the “zero zone” of the eruption, as it was the first of the most affected.

It was on that day that the volcano of Cumbre Vieja, on the island of La Palma, in the Spanish archipelago of the Canaries, erupted. The volcano had been dormant for decades but its sudden awakening, preceded by thousands of earthquakes in the previous days, turned into a real nightmare for citizens and local authorities.

Holiday spaces, beaches, homes or simply peaceful rural areas were and continue to be, according to local means, invaded by a sea of ​​lava.

There are already thousands of homeless inhabitants (at least five thousand), more than a hundred destroyed houses and many other structures, while “the smell of burning and sulfur and an incessant rain of ash accompany the relentless advance of the lava, which carries walls, gates and doors”, describes “El País”.

“A two-centimeter layer of volcanic gravel, known in the Canary Islands as picón, covers the asphalt of the streets,” the newspaper said. While trying to avoid worse disasters, such as loss of life, and fighting to save as much as possible, there isn’t much else to do but watch the lava pass, authorities say.

The situation has, for now, no end in sight, but it seems, as far as possible, to be under control, including with regard to Portuguese citizens.

This Tuesday, September 21, the Secretary of State for Internal Affairs, Patrícia Gaspar, explained that there are a dozen Portuguese who are in the most affected area of ​​the island of La Palma, but who are doing well and should not need help.

Meanwhile, several images and videos of the destruction trail left by the volcano that had been dormant since 1971 began to multiply through the Internet and social networks.

In some drone videos, the ones that manage to be more accurate and close, it is possible to see the lava released by the volcanic eruption covering houses, fields and even swimming pools, resulting in impressive images.

Meanwhile, with the eruption of the La Palma volcano dominating the world’s attention, three thousand kilometers away there was another explosion this Tuesday, September 21st.

As NiT has already reported, this time in Italy, where Sicilians are already used to the bad temper of the neighboring volcano and nobody was surprised by this, which is the second eruption in the last month and the 51st of 2021.

What is one of the most active volcanoes in Europe and the world began to spew smoke and lava during the night, in a return to activity which, however, this time seems not to be too worrying.

Back in La Palma, click on the gallery to see some of the most impressive photos of this phenomenon of nature on the island of Spain, which have been shared: 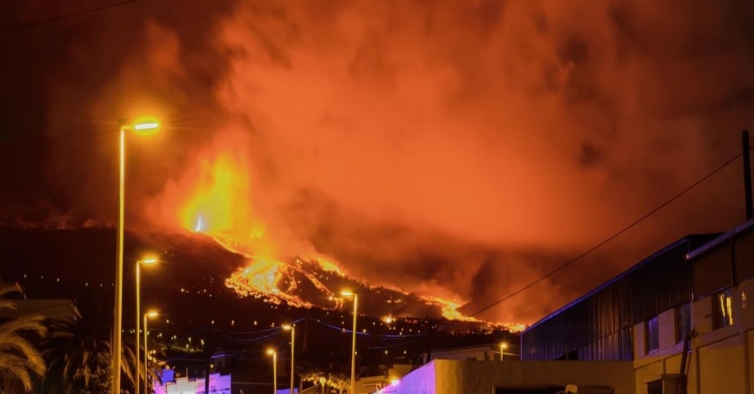