If you’ve been on the Internet in recent days, you’ve come across the title “Squid Game” for sure. The South Korean series has been on the air for less than a month and Netflix has already revealed that it is their biggest release ever.

Since September 17th, the series has already conquered more than 100 million viewers around the world.

A group of people desperate for the debt they have accumulated accepts the invitation to participate in a survival game based on children's games, the prize may vary between a millionaire value, if it comes to an end, and its death, if it is lost. The motto seems macabre, and those who have already seen it confirm it.

However, and although the concept is not exactly new, “Squid Game” won over 111 million people worldwide, since the day of its launch on Netflix, September 17th. If anyone complained about the streaming platform's catalogue, the nine episodes of the new drama series could satisfy subscribers.

By the way, remember that “Squid Game” was such a success that a South Korean operator decided to sue Netflix for the increase in traffic caused by it.

According to Netflix, is the first series on the streaming platform to attract 100 million viewers in its first month. In fact, “Squid Game” broke the record of 82 million aggregates in the first 28 days, held by the series “Bridgerton”.

Note, however, that the 111 million viewers may not have seen “Squid Game” in its entirety. This is because the Netflix accounting considers users who watched at least two minutes. 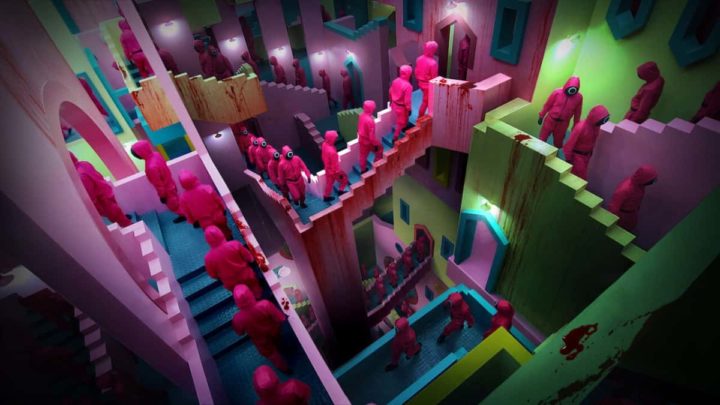 Despite the age restriction associated with “Squid Game”, children are not restricted from accessing Netflix and watching the series. In this sense, some concerns raised by parents and teachers regarding the relationship between the series and the minds of the youngest.

For example, Conyers School and Sixth Form in Yarm, England, is warning parents of children about the series, warning of violent and macabre scenes, and advising against viewing them by the younger ones. After all, “Squid Game” deals with scenes of explicit sex, nudity, extreme violence, self-mutilation, suicide and inappropriate language.

In addition to that, other elementary schools in the same area have also sent messages to parents about their concerns regarding the viewing of “Squid Game”.

So, due to the immaturity and innocence associated with children, many have been the organisms to advise against viewing "Squid Game" and suggesting the creating a Netflix Kids profile, which limits the access of the youngest to the platform, and makes only what has been selected available to children.