This is a first reading of the political-partisan panorama after the earthquake that hit Portugal last week, with the lead of the State Budget for 2022. The Portuguese Catholic University survey for RTP, Antena 1 and newspaper Public, held from October 29th to November 4th, analyzes various parameters of the national political spectrum, from the Assembly of the Republic to the Government, passing through the role of the Head of State.

As to direct voting intentions, the PS has 26 percent (it was 24 percent in May 2021), which translates to an estimated 39 percent in electoral results. (it was 38 percent before summer). In other words, the absolute majority fails but guarantees a better result than what was obtained in the last legislatives.

To notice that this value – the estimate of electoral results – is obtained by calculating the percentage of direct voting intentions in each party in relation to the total valid votes, excluding abstentions and invalid responses. In this case, they are only considering the inclinations of respondents who are “sure” that they are going to vote.

Then comes the PSD, with 17 percent direct intention to vote (same as in May 2021), with an estimated 30 percent in election results (plus two percent compared to recent months). 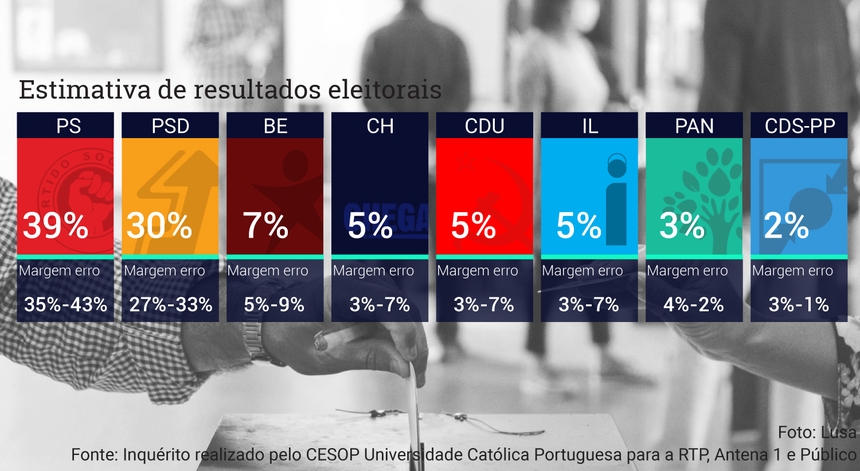 Thirdly, the Left Bloc emerges with a 4 percent direct intention to vote (it was 3% in May 2021), which translates to an estimated 7 percent in electoral results, slightly lower than the last recorded figure of 8%.

Despite having lost in the direct intention to vote and in the estimation of electoral results, o Chega comes fourth in this poll, with an estimated 5 percent in election results. According to this survey, also the CDU and Liberal Initiative, which emerge later, are expected to achieve similar results.

appear after the PAN, with 3 percent in the Catholic estimate, and only after the CDS-PP, with 2 percent of the vote.

The UCP poll also deals with the troubled political period experienced in recent weeks and for a large majority of respondents (68%) believe that the rejection of the State Budget in the Assembly of the Republic was negative for the country. Only 23 percent consider this rejection to be positive and 9 percent say “doesn’t know” or “doesn’t respond”.

It is also important to look at the responses obtained regarding the behavior and voting of the various parties, namely on the left. There are 55 percent and 53 percent of respondents who consider that the Government “has done well” in rejecting the proposals of the Communist Party and the Left Bloc, respectively.

In both cases, 30 percent consider that the Executive “should have accepted” the proposals of the former “Geringonça” partners. In evaluating the vote on the left, 60 and 61 percent of respondents consider that PCP and Left Block, respectively, “should have missed the budget”. On the other hand, 29 percent consider, in both cases, that both PCP and BE “did well” in rejecting the Government’s proposal. 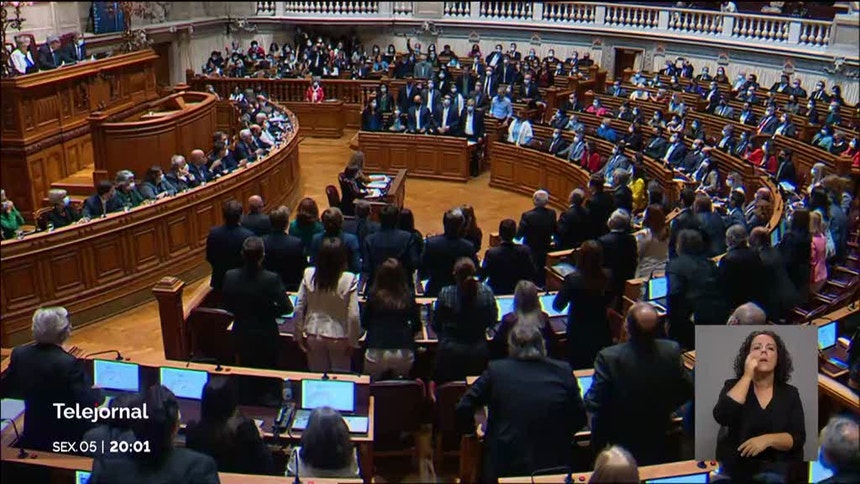 In response to the question about whether there is any party to benefit from the OE2022 lead, the sample is divided: 47 percent say yes, but 46 percent consider that no political force gains from this situation.

Among the respondents who see parties that are benefiting, 22 percent say that it is the PSD that will have gains, 16 percent the Chega, and 12 percent the PS.

When pointing out the culprits for the current political crisis in the country, the majority (37%) says they are the PS and the prime minister, followed by the parliamentary left. (31% responded BE and CDU). There are still 5 percent who answer “PSD” and another 4 percent who see Marcelo Rebelo de Sousa as the main responsible.

Now on the question of the date for the elections, the majority of respondents (55%) believe that they should take place “as soon as possible”, while 41% defend that the date should allow time for all parties to have their respective leaderships resolved.

Precisely in relation to the role of the President of the Republic, most respondents admit that Marcelo Rebelo de Sousa could have allowed the presentation of a new budget proposal.

Before the lead, there is 53% of respondents believe that the PR should “allow the Government to present a new Budget”, while another 42% argue that the President should “dissolve the Assembly of the Republic and call early elections”, via the one that was eventually followed by the current Head of State. 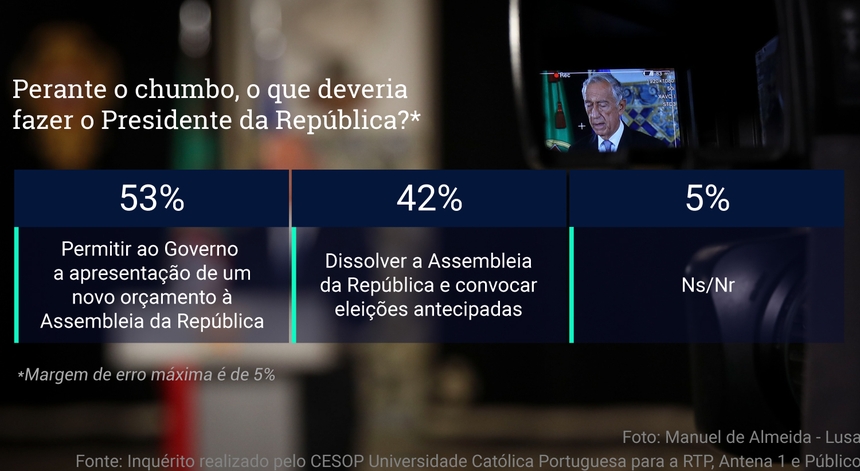 However, most respondents (51%) believe that Marcelo Rebelo de Sousa “was okay” in this crisis and 10% more even say that it was “very well”. However, others 25% consider that the Head of State “was bad” and 7% even say that the President “was very bad” in this process.

Finally, still regarding Marcelo’s performance, 54 percent of those questioned responded that the President of the Republic “did well” in announcing that he would dissolve the Assembly of the Republic if the budget was rejected. However, there is 38 percent of respondents considered that the Head of State “has done wrong” to make this notice in advance. 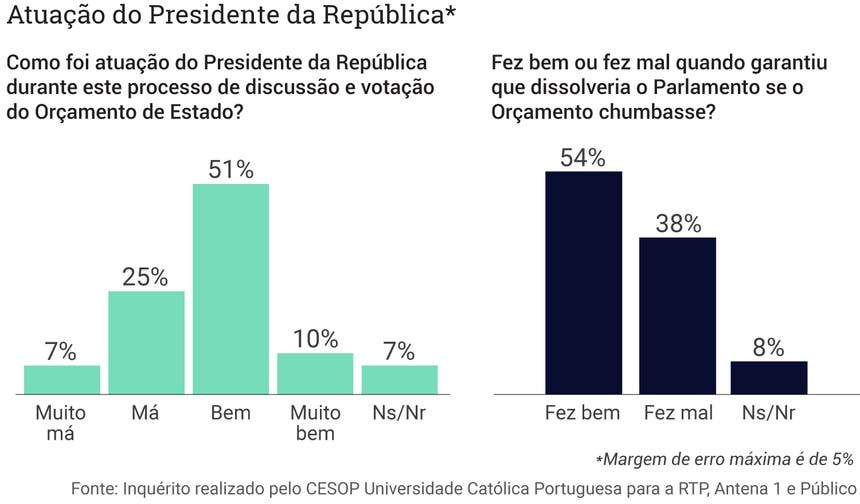 Datasheet
This survey was carried out by CESOP – Universidade Católica Portuguesa for RTP, Antena 1 and Público between October 29 and November 4, 2021. The target universe is composed of voters residing in Portugal. Respondents were randomly selected from a list of mobile numbers, which was also randomly generated. All interviews were carried out by telephone (CATI). Respondents were informed of the purpose of the study and expressed willingness to participate. 878 valid surveys were obtained, with 42% of respondents women, 29% from the North region, 23% from the Center, 33% from AM de Lisboa, 6% from Alentejo, 4% from Algarve, 3% from Madeira and 2% from the Azores . All results obtained were then weighted according to the distribution of the population by sex, age groups and region based on voter registration and INE estimates. The response rate was 43%. The maximum margin of error associated with a random sample of 878 respondents is 3.3%, with a 95% confidence level.