Azeredo Lopes, who resigned from his post following the process, was accused and convicted of four crimes: denial of justice and malfeasance, personal favoring by an employee, abuse of power and denial of justice. Now he has been acquitted of all of them.

Azeredo Lopes said leaving this process with “the head held high” and considered it important to verify that “both the Public Ministry and later the collective itself have confirmed what I always said was the truth”.

“I leave this process unreservedly and this for me, individually, is very important,” he added in statements to journalists leaving the court.

Germano Marques da Silva, lawyer of Azeredo Lopes, considered after the trial that “this process is a disgrace from start to finish”, as there was “incompetence” on the part of everyone involved, from the Judiciary to the Public Ministry.

The confessed author of the theft of weapons from the Tancos magazines, João Paulino, was sentenced to eight years in prison for the crimes of terrorism and drug trafficking in the Santarém Judicial Court.

Carlos Melo Alves, lawyer of João Paulino, stressed that his client’s conviction for drug trafficking and which earned him two years in prison is not related to the Tancos case, so the prison sentence for Tancos is six years and not eight.

Former Spokesperson for the Military Judiciary Police (PJM) Vasco Brazão was sentenced to a five-year prison sentence, suspended in its execution for an equal period, for the commission of a crime of personal favoring committed by an employee and a crime of falsification or counterfeiting of documents.

Vasco Brazão, who was acquitted of the crimes of criminal association, arms trafficking and mediation, and denial of justice and malfeasance, was also sentenced to the accessory sanction of prohibition of exercising functions for a period of two and a half years.

Ricardo Serrano Nogueira, Brazão’s lawyer, confirmed to journalists that the defense will appeal the sentence applied client. “It’s a question of justice,” he declared. 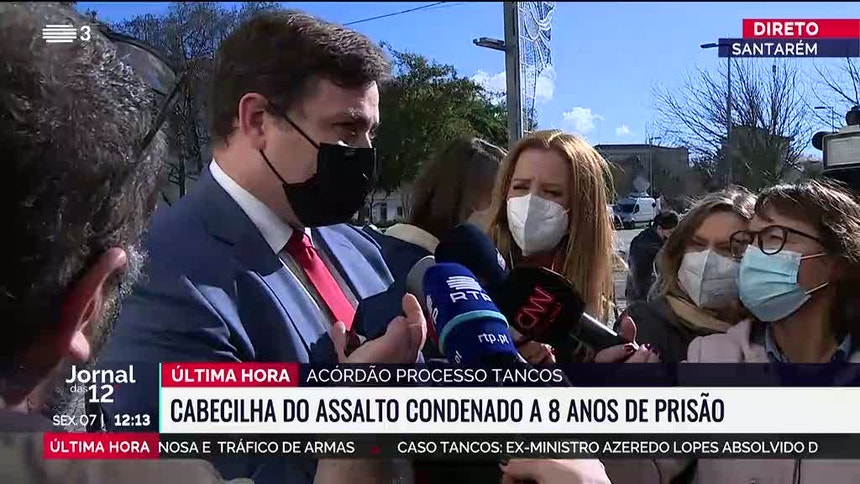 Ricardo Sá Fernandes, another of Brazão’s lawyers, says he was pleased that several of the crimes had fallen, considering that the criminal association and arms trafficking “had no place”, so the court was “reasonable and balanced”.

In addition to Vasco Brazão, Luís Vieira and four other defendants were also convicted of favoring. Vieira and Brazão were, however, acquitted of denial.

Three of the assailants were sentenced to prison terms: João Paulino was sentenced to eight years, João Pais to five and Hugo Santos to seven years and six months.

The former director of the Military Judiciary Police, Luís Vieira, was sentenced by the Santarém Court to four years in prison, with execution suspended for an equal period.


Vasco Brazão, on the other hand, was sentenced to five years of suspended sentence, as were Roberto Pinto da Costa and Lima Santos.

Upon reaching the court, Azeredo Lopes did not want to make statements to the journalists. The former minister was accused of four crimes in this case. In the closing arguments, the attorney of the Public Ministry had already considered that Azeredo Lopes should be acquitted because there is not enough evidence.

The theft of weapons was disclosed by the Army on June 29, 2017 with the indication that it had occurred the day before, with the recovery of some material having been made in the Chamusca region, Santarém, in October 2017, in an operation that involved the PJM in collaboration with elements of the GNR from Loulé.

At issue were a set of accusations ranging from terrorism, criminal association, denial of justice and malfeasance even forgery of documents, influence peddling, abuse of power, receipt and possession of prohibited weapons.

In addition to former Defense Minister Azeredo Lopes, former director of the Military Judiciary Police (PJM) Luís Vieira and former spokesman for this military institution Vasco Brazão, as well as elements of the GNR from Loulé and Porto, were also on trial.

The trial began on November 2, 2020, with a forecast of three weekly sessions, at the Palace of Justice of Santarém, and then moved to the National Exhibition Center, to ensure physical distance due to the covid-19 pandemic.