ALERT to heavy rain and wind this weekend

This weekend, a very important low pressure system stretches from the British Isles to France. At the front of this system, warm air rises from the Mediterranean towards Germany and conflicts with cool air from the ocean. France is at the heart of this conflict of air masses, with the very slow progression of a very active disturbance, which takes three days to cross our regions, between Saturday and Monday. In its passage, it caused intense rains last night in the north-west of France, and even a 24-hour record in Nantes and Laval. From this Sunday, with the progression of the disturbance, the central and south-eastern regions in turn undergo bad weather, in the form of a Cevennes episode, strong winds and thunderstorms which will continue until Monday. .

A 9h, as expected, the cold front is finally shifting further to the east, straightening up. This is the end of monitoring for the northwestern departments even if it continues to rain steadily until late morning but without any real direct consequences. On the other hand, degradation is well in place in the Cévennes with sometimes dilluvian rains and hourly intensities sometimes exceeding 100 mm. The southerly wind is blowing violently over the center-east with gusts of 70 km / h over Saint-Etienne and up to 112 km / h in Les Sauvages (Rhône) which has also recorded a maximum gust of 130 km / h last night.

A 7h, the cold front continues to undulate over the same regions of the Pays de la Loire to the Paris basin and to Normandy with still heavy rains. Hourly intensities sometimes reach 15 mm / h as in Sarthe at Luart. It fell over the last 24 hours to 98.9 mm at Nantes Villes and 93.1 mm at the Nantes station, which makes it a monthly record for the station, the previous record dating from 1979. At the front from the cold front, on the eastern facade, the southerly wind blows violently on the center-east with gusts between 70 and 80 km / h. Heavy precipitation also developed in the Cévennes with hourly intensities between 15 and 30 mm.

This morning, while the rains and wind will gradually weaken over the hours in the north and west of France, the rainy and windy disturbance will slide eastward to extend from New Aquitaine to Lorraine. At the same time, the wind will blow very strongly between 70 and 90 km / h between Rhône and Saône and up to 110 km / h in the mountains. Sometimes stormy rains will begin to develop between the north of the Hérault and the Ardèche.

This afternoon, the Cévennes episode sets in with long lasting rains of strong intensity from Gard and Lozère to Haute-Loire. These heavy rains extend from Auvergne to Burgundy towards Lyonnais and the Saint-Etienne basin at the end of the day where the wind continues to blow very strongly before the onset of precipitation.

The next night, the episode of bad weather continues in the south-east, from Languedoc to the east of the Massif Central to the Rhône valley with little mobile thunderstorms likely to generate very significant amounts of rainfall in a short time. It rains heavily in Bourgogne-Franche-Comté.

On Monday, this very turbulent weather still present from Languedoc to the Cévennes to the Rhône valley will reach the Provence Alpes Côte d’Azur region. It is only in the evening that the conditions will improve in the south-east with the evacuation of the disturbance towards Italy, while a new significant rainfall and windy degradation is expected in the north-west of France in the arrival of a very dynamic Atlantic disturbance.

During this bad weather episode we wait

– strong winds, up to 110 km / h at the seaside and in the mountains and 90 km / h in the plains, which can cause trees to fall on pavements and electric cables and block roads and cause power cuts.
– heavy rains, with very significant accumulations of up to 50 to 100 mm in 24 hours in the north-west, corresponding to a month and a half of precipitation and nearly 300 mm in the Cévennes from Sunday to Monday.
– a high risk of urban runoff, floods and flooding in the sectors most exposed to heavy rains and stationary storms. 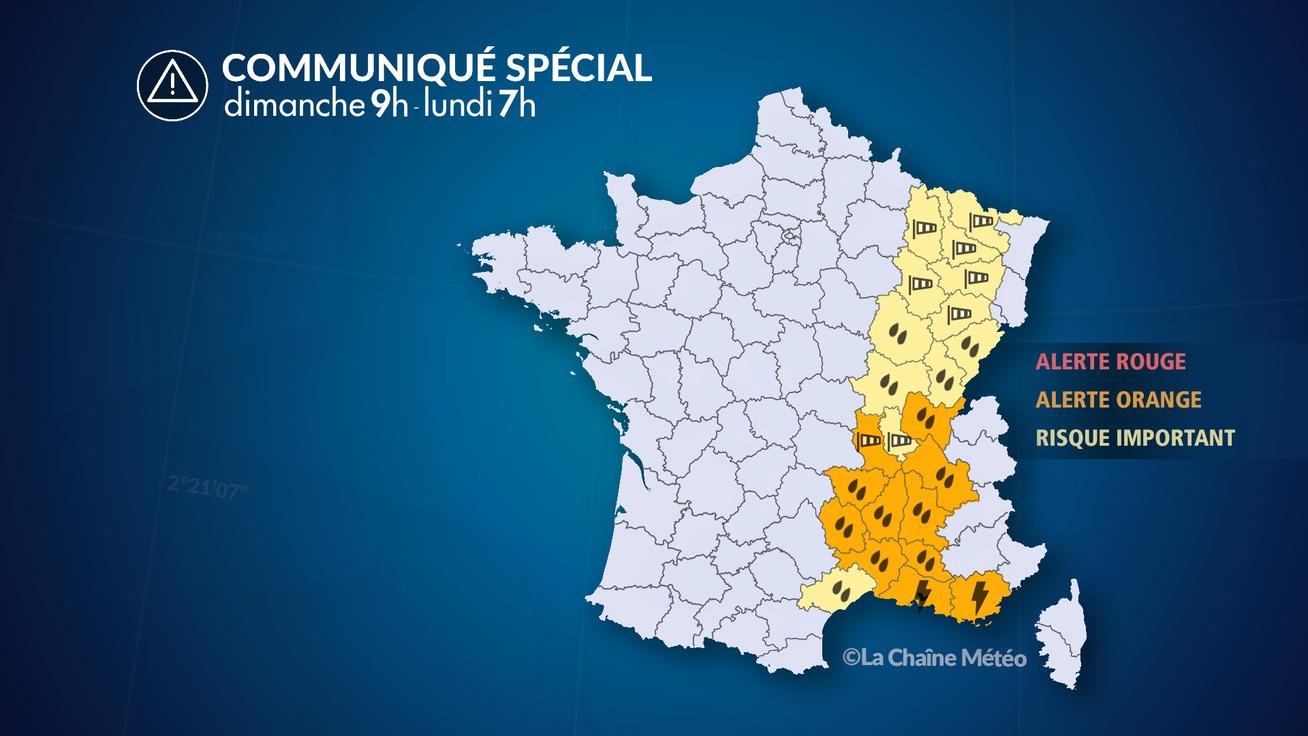