In mid-May, the Pardubice band Vypsaná fixa released the tenth series “Kusy radosti”. Manager Ludmila “Dydla” Karlíková and director of San Piego Records Vladimír “Ladis” Jaselský christened it in Braník Ice Rooms on Wednesday. It was played and sung for two hours, it’s a pity that the petition was quite quiet.


Please excuse the reduced photo quality. They were taken by mobile phone, we didn’t have a professional photographer at the concert.

It is not often that I see the Fixed Mark twice in five days. And it doesn’t happen that I write about it in such a quick sequence. At Rock For People, the gentlemen played to the visitors the songs that received the most votes in the scoring and selection from the fans and enjoy the popularity within three-quarters of an hour. In Modřany, they played pelmel of their repertoire for two hours. Again without long bullshit, Márdi always just tossed the title of the song so that the fans would know, and the setlist, which they never do, stomped on butter. The baptism followed the first songs. The godparents reached into their ranks, among the closest collaborators. Manager Ludmila “Dydla” Karlíková and director of San Piego Records Vladimír “Ladis” Jaselský christened the record. It went quickly during the title song “Pieces of Joy” and without further comment. Frontman just said: “The baptism that lasts over a minute is awkward.” And it was definitely not awkward, it was after theirs, punk. 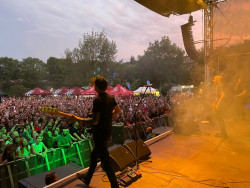 The only complaint is this time to the sound – the band was barely heard at the beginning. It was not the fault of the sound engineers or the band, but the fault of the petition covering the area. It ends earlier, and this time it’s also on decibels, which is not only bad for Fixy – when the music sounds muted, it won’t draw you into the action. Maybe it was also due to the fact that the first news was heard, which is probably not captured by the band or the fans. And maybe they don’t have such rock’n’roll grades as age-old hits, without which we can’t imagine a fixed concert. The visitors seemed to be more disciplined, more passive than usual, respectively, one side steaming and gagging, the other not. Fortunately, the concert graduated. Márdi aroused people to “Komik lobotomik”, where he sings: “Take off today’s T-shirt with the words ‘Yesterday’ …” they threw up their uppers and spun them overhead. At “Limit” the right fan stage dyiving finally started – but that it lasted! At the “Antidepressant Fish”, the fans squatted so that they could jump to the chorus. Fixa also dusted off “Samurai Swords” while thanking those at Rock for People. 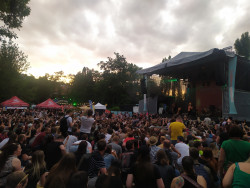 One of the producers – Ondřej Ježek – also came to the stage to greet him. They dedicated the song “Kostel-biohazard-McDonald” to this. Unfortunately, the second producer Dušan Neuwerth did not manage to show up due to time constraints. The band lost the new series by almost three quarters. She gave away even after the concert pieces of joy – An autograph session followed, where fans could have a lot to sign. Despite the faint sound, it was a great evening.