Unfortunately, the current time is not very good for live gaming. Of the series of three smaller concerts that Mirai wanted to return to their beginnings, only the one at Rock Café took place this year. The Brno and Frýdek-Místek will take place at the end of February next year. We bring a report from the Prague baptism.

place: Rock Café, Prague
date: November 21, 2021
setlist: Poems (I’m sorry), I’m falling asleep next to you, Birthday, Yesterday, Then, I’m calling, Openspace, Wolves, Where have you been all night, Just, Fly (David), Despite it all, I want to dance, Come closer to me, Yahoda, Hometown, Otchi, If you can’t, add

Sunday’s performance was different for Mirai for several reasons. In small spaces such as Rock Café, the band no longer plays, as it now successfully sells out Forum Karlín, for example. Frontman revealed that they take the concert as a performance of the album to the most loyal fans or rather to friends. They played the new album “Maneki Neko” (whose review we are preparing) completely and in unchanged order. Due to the relocation of the remaining shows, it was also the last game for the next few months, so the club was really hot at times. The formation certainly did not save energy.

“Poems (I’m sorry)” turned out to be a great opener. The atmospheric intro was gradually enriched by a trap beat, drums and guitars joined in the chorus. He returned to singing and leaned the audience, even though he only knew the material for a few days, to join him. It was clear that the boys had won. They were able to squeeze the most out of every song, even the weaker ones, such as the single “Yesterday” or the short “Where You Were All Night”, which they played once again in an accelerated, more rock form. It is in this improvement of the songs that the magic of the concerts lies. Thanks to the relaxed atmosphere, jokes were more common than usual. “For the first time in my life, I have a reading device,” the singer admitted in about a third. “So if you feel like I’m looking up, it’s not because I don’t want to pay attention to you.” he added. He also exaggerated the fans not to send votes for him in the StarDance dance competition, because it exhausts him a lot. Before the additional “I want to dance”, he noted that he will play a song that is not true. The punk impression was further confirmed by crowdsurfing on an inflatable strawberry. 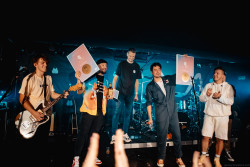 The band also christened the new record. She invited the producer of the album Ondra Fiedler and the manager Jiří Kouba to the stage. He announced that in just 24 hours after the release, “Maneki Neko” became gold. As a thank you to the fans, they also sent the newly won Nightingale to the audience, with whom perhaps everyone was happy to take pictures. Among the strongest moments were the melancholy club, such as the mobile-lit club at “Lítej (David)”, when only a simple guitar accompaniment was enough to conjure goosebumps. David Stypka’s art was also reminiscent of the excellent “Despite All This”, which sounded like the first addition. The presentation of the retro piece “At the Time” strumming on a nostalgic note was also very successful. Overall, it was a very energetic evening, which fans in Brno and Frýdek-Místek should not miss. Before the full conclusion, Mirai promised another concert in Prague. It will take place in a much larger space – the O2 arena. See you there too!