Galaxies – massive collections of gas, dust and billions of stars and their solar systems – are a fundamental component of our Universe. Understanding how they formed and evolved over the cosmic ages remains one of the greatest challenges of modern astronomy.

There are a few reasons for this. First, the number of galaxies: astronomers have estimated that there are about 200 billion galaxies in our Universe. Second, the size and age of these galaxies. Their ages range from 100 million to 10 billion years and their size ranges from approximately 3,000 to 300,000 light years. A light year is 9.46 x 10¹² km – clearly, therefore, galaxies are huge and ancient.

However, galaxies are not entirely mysterious. Technology is allowing astronomers to study and analyze them in much more detail than was previously possible. Our new study used observations from the powerful MeerKAT array of radio telescopes located in South Africa to analyze more than 2,000 galaxies. The MeerKAT is the most sensitive radio telescope in the southern hemisphere until the Square Kilometer Array (SKA, which will be the world’s largest radio telescope) is completed.

Our findings suggest that, within the galaxies we analyzed, their course of evolution is likely accompanied by cosmic ray electrons losing energy over time. Energy does not – and cannot – simply disappear. Instead, as electrons slow down, their energy is converted to that of electromagnetic emissions. These emissions, after escaping the confines of the galaxy and crossing cosmic distances, are among the telltale signals picked up by MeerKAT.

These findings help us better understand the nature of these galaxies and, in addition, the formation and evolution of galaxies in general – including our home galaxy, the Milky Way, which may be going through a similar process right now. This is not a process to worry about; it’s just something scientists want to understand better. 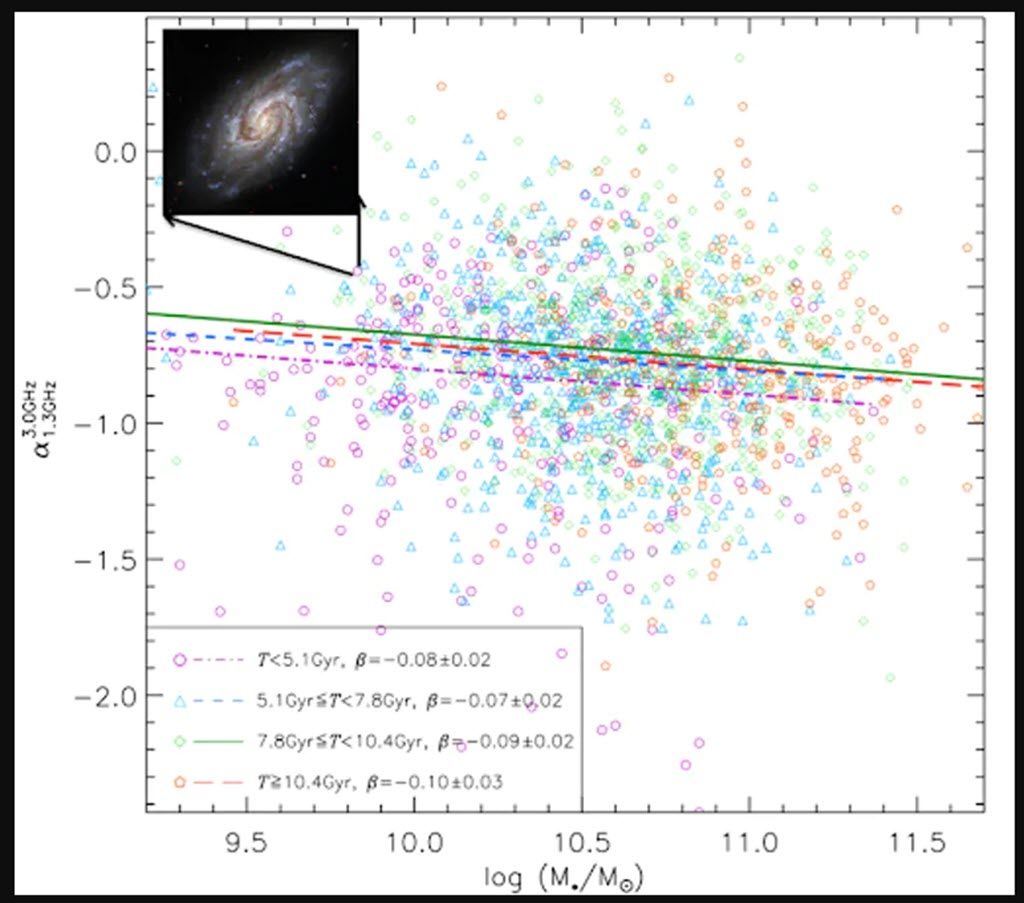 Our study was what we call statistical analysis. Different astrophysical phenomena create electromagnetic waves at different wavelengths, including radio, visible light, infrared, ultraviolet and x-rays. Therefore, it is important to be able to combine different observations across a wide range of spectra. That’s what a statistical analysis allows.

We selected 2,094 galaxies that are active in star formation, which means they are energetic and young – on cosmic timescales. This is an ideal sample to study the way galaxies grow and the main characteristics that affect their formation and evolution.

The distances to these galaxies are so great that light, the universe’s fastest messenger, takes between 1 and 11 billion years to reach them. Therefore, the galaxies we observe now reflect what they used to be about 1 to 11 billion years ago; they are at different evolutionary stages.

We then study the fundamental physical properties of these distant galaxies, combining new observations from MeerKAT and existing observational data from other telescopes. MeerKAT data was collected over nearly 20 hours as part of the MeerKAT International GHz Tiered Extragalactic Exploration ( MIGHTEE ) project. This aims to observe deep extragalactic space to explore the cosmic evolution of galaxies. It is one of MeerKAT’s major research projects prioritized by the South African Radio Astronomy Observatory.

By combining the visible, infrared and radio light emission of these 2,094 selected galaxies, the study measured how massive, how active and how bright they appear to be at different radio frequencies, as well as some other fundamental physical properties. We then connect the radio emission intensities with the measured physical properties of these galaxies.

Further quantitative analysis shows that this statistical trend is consistent with the radio emission of cosmic ray electrons that are gradually decreasing – a process that accompanies these galaxies at different stages of evolution.