Who knows, maybe one day space will really be for us all to explore.

WASHINGTON, D.C., USA — Have you ever wondered what living on Mars, Venus, or an exoplanet would be like?

The answer is, “probably not,” but that hasn’t stopped the minds at NASA from imagining a future where the possibility of a multi-planet existence could become a reality.

In a video released by NASA Goddard on YouTube, space lovers can see themselves lifting off on a rocket labeled “Exoplanet Travel Bureau” before taking off to participate in some out-of-this-world activities.

The video envisions settlements on the surface of the Moon, rocket landings on Mars and people taking in the sights from a floating observatory on Venus. Plus, there’s even space kayaking, tourism and skydiving in this imagined future from NASA.

So, if you had the chance, NASA wants to know “Where will you explore?”

Luckily, you can get a head start without having to step foot outside of your home. All you have to do is visit the nation’s top space agency’s exoplanet website and you can traverse the surface of planets and tour the galaxy in 3D.

The look into what our distant future could look like was inspired by a series of dazzling travel posters produced by NASA’s Jet Propulsion Laboratory. 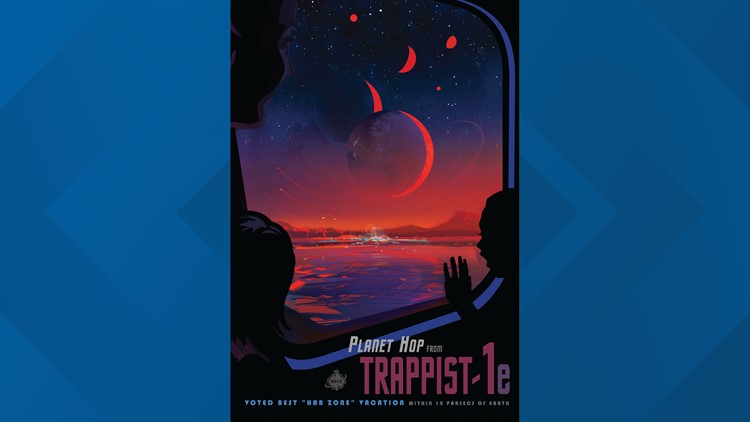 RELATED: Why is NASA now delaying the moon landing past 2024?

And while it might be hard to imagine a time in the future where this becomes a reality — it may not entirely be all that far-fetched.

NASA is aiming to return astronauts to the Moon in 2025. The mission will carry the first woman and first person of color to the lunar surface for the first time in more than 50 years.

Illustrations of possible future lunar settlements have been released and space industry companies are designing and planning commercial replacements for the aging International Space Station.

There’s also a European Space Agency that opened an oxygen plant in 2020 that says it found a way to make the air humans need to breathe from Moon dust.

Plus, for years we’ve had several rovers trekking across Mars in the hopes of one day adding human boot prints to the tire tracks on the Red planet’s surface.

So, who knows, maybe one day space will really be for us all to explore.