One of them we’ve visited before, and we’ll soon be heading back, this time with the intention of staying up there. At the time of writing, a number of uncrewed spacecraft have already landed there, and also six missions carrying humans, but one thing remains certain: we still don’t know enough about landing conditions to consider this operation a safe one.

With the Artemis program on the roll and several other private initiatives in the oven, it’s likely the number of Moon landings will increase dramatically by the end of the decade. And that also increases the risk of something going wrong, unless we’ll find a way to learn more about this process.

To that end, NASA is working, among other things, on a camera capable of capturing images of spacecraft as they descend and set down on the surface of the Moon (or Mars, for that matter).

The hardware is called ExoCam, and it’s the work of a group called Zandef Deksit together with Honeybee Robotics. It is described as a 360-degree remotely deployed camera and sensor payload system, and it has been designed to shoot both the descending spacecraft and the area where it is coming down.

In doing so, the piece of technology might help scientists here on Earth get a better understanding of things like “lunar regolith disturbances caused by rocket plume,” which may lead to better future spacecraft designs.

To test the idea, NASA and the camera’s makers have been using a Masten Space Systems Xodiac rocket as a platform ever since 2020, and this week the teams working on the project announced they’ve “wrapped up the latest series of flights at our test site in Mojave, CA, including nine Xodiac tether tests and two free flights.”

Unlike what common sense would tell you, the camera is not attached to the rocket or the landing area. Instead, it gets spat out (the professional term would be jettisoned) at different altitudes, hits the ground and bounces thanks to the flexible protection cage it is wrapped in, and then starts shooting.

Two videos of the tests can be found below, and they perfectly demonstrate how the concept is supposed to work. Sadly, at the time of writing, there is no info on how much more R&D is needed before we get to see ExoCams deployed on rockets. 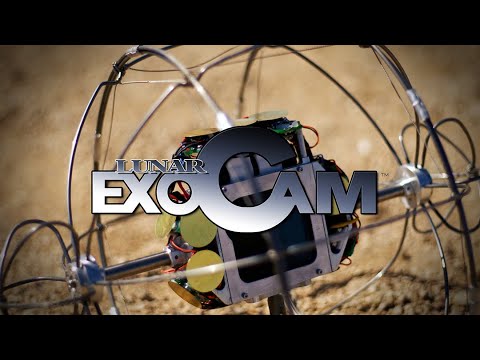